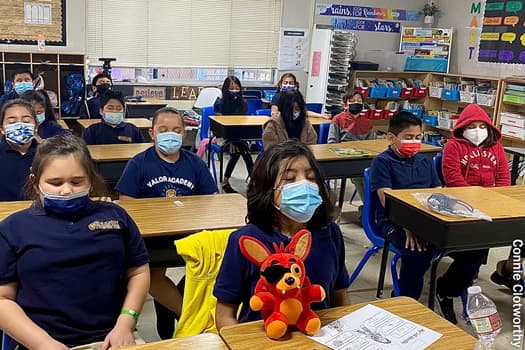 In partnership with Worthy Beyond Purpose, Valor Elementary teaches meditation and mindfulness to their students weekly. It’s part of Bright Star's focus on holistic support for students to thrive in and beyond the classroom.

As WebMD reported on the benefits of mindfulness and meditation, “the differences in behavior are noticeable, says Talar Samuelian, assistant principal of culture. She launched the program there in late 2021 with her third and fourth graders, concerned about their behavior after the pandemic brought remote learning.”

“This year, the students are much calmer, she says. Among the benefits, she believes, are that ‘it helps with increasing the sense of belonging.’”

“One thing surprised Samuelian. She had assumed some of the third and fourth graders would be ‘too cool’ to take part and push back. ‘Not one did,’ she says. ‘They were all transfixed; they are all into it.’”

“Kylie Garcia, a 9-year-old with dark brown eyes and hair, who had listened intently during the session and took part fully, says: ‘I like meditation because my body felt calm when meditating.’ She compares it to a recess break.

“Jaden Martinez, also 9, says he views mindfulness somewhat like subtraction. When you just breathe during mindfulness, he says, it can help you get rid of all those random thoughts – subtract them, basically – and just be in the moment.

“At Valor Elementary, mindfulness class is on Thursdays; one girl offered: ‘I wake up and realize it is mindfulness day and I’m excited to come to school.’”